The large-scale adoption of wind and solar power calls for technologies that store electrical energy at low cost. Among the major approaches for storing electrical energy (batteries, solar fuels, solar thermal), only batteries have emerged as practical, commercially viable devices. Thus, batteries are on track to bring about a revolution in transportation: within 15 years, most major vehicle manufacturers (Ford, GM, Volvo, VW) will entirely phase out gas- and diesel-powered vehicles. Toyota, the last major vehicle manufacturer that had placed large bets on hydrogen fuel cells, recently announced that they were refocusing on batteries.

The rapid expansion in lithium-ion batteries poses challenges, however, and many research groups are exploring alternatives to lithium. Although other cations (Na, Mg, Ca, Zn) have attracted widespread interest, our group has taken a divergent strategy: the development of batteries that shuttle anions such as fluoride.

The development of new batteries—and of technologies in general—requires new materials. The central aim of our lab is the discovery of new inorganic materials for energy applications. 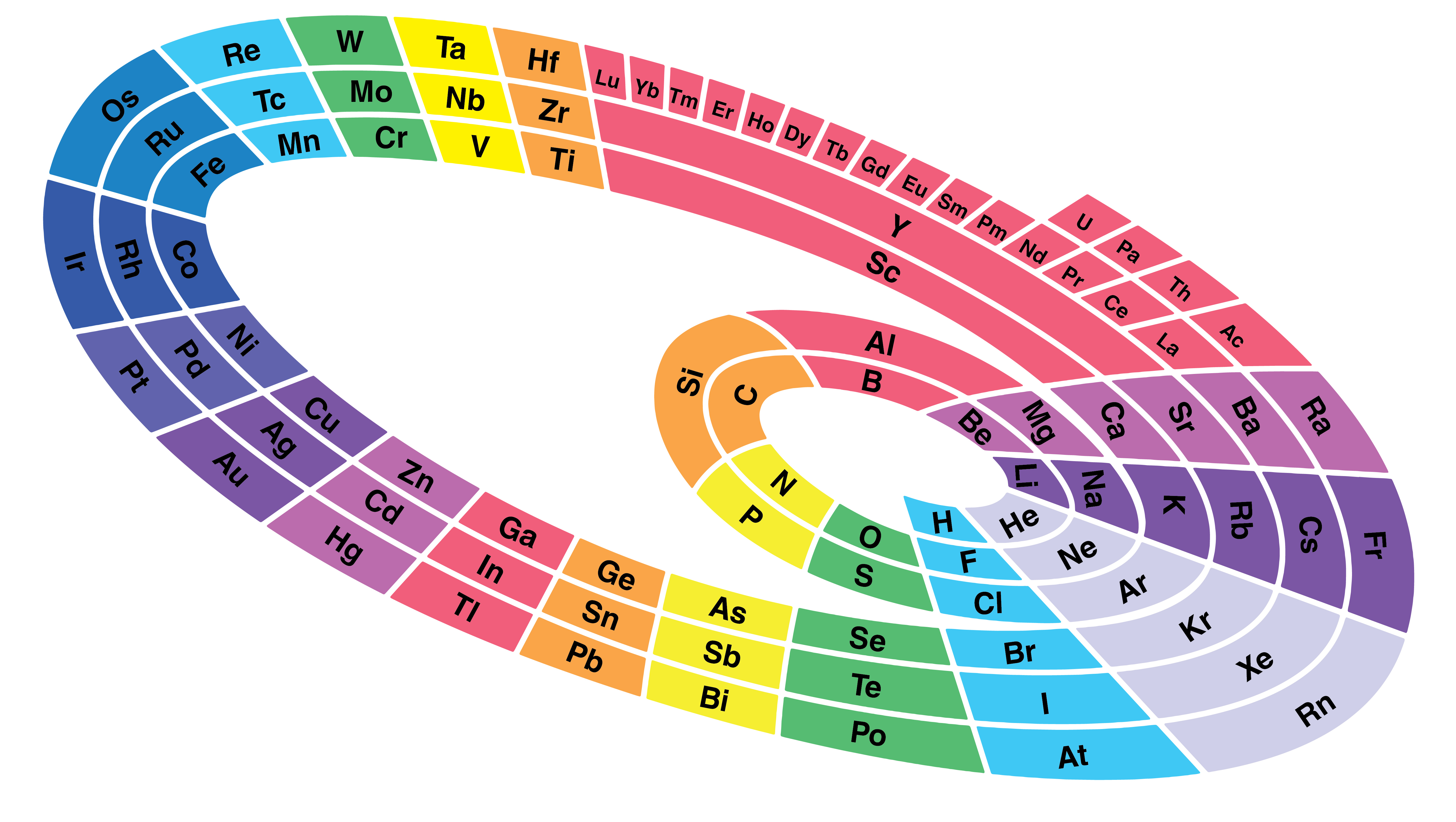 The periodic table has over 100 elements. There are more than 1002 ways to combine two elements (“binaries”) and over 1003 ways to combine three elements (“ternaries”). Even among binary compounds, most remain undiscovered. Discovering, understanding, and using these compounds will be a cornerstone of addressing important societal challenges.

Our efforts in discovery are currently focused on two types of materials: electrides and 2D materials.

Electrides are an exotic class of ionic solids. Unlike conventional ionic solids, the site that would normally hold an anion instead holds a bare electron. For example, one can imagine replacing all the Cl- in NaCl with an electron. Although this hypothetical material does not actually exist (Na+ and a bare electron would spontaneously recombine to form sodium metal), there are materials in which the bare electron is stable. One such material is Sc2C—a material our lab discovered—which can be written as [Sc2C]2+·2e-. In this material, the atoms maintain a net positive charge and are balanced by sites that hold negatively charged electrons.

The chemical and physical properties of bare electrons are fundamentally different from conventional anions, and these differences often lead to properties that are more extreme—often more useful—than conventional materials. For example, in the electride [Ca2N]2+·2e-, the electride electrons give rise to electrical conductivity that rivals silver and the electrons are better electron donors than most alkali metals. These exceptional properties motivate our further exploration of this exciting class of materials.

Most of the electrides that we study have layered structures, and this naturally led us to explore 2D materials as well. Our lab is generally interested in synthesizing and exploring new types of 2D materials, and our discovery of several new 2D materials are among our more important contributions.

Beginning in 2013, we developed a new method to exfoliate black phosphorus to form phosphorene. Phosphorene is exciting because it becomes quantum confined as a 2D material, exhibiting a highly tunable band gap. Now, our approach for synthesizing phosphorene is used to make a commercial product.

Our lab has several active projects that are explore the synthesis and structure-property relationships in other new classes of 2D materials.

Although lithium-ion batteries are revolutionizing how we store energy, challenges remain—including cost, energy density, and charge rate. This has motivated our lab to explore alternate types of batteries, especially those that shuttle anions like fluoride.

Electrochemical measurements of these batteries are a core part of our experimental efforts. These experiments take multiple forms. For example, we have developed innovative methods to visualize electrochemical intercalation in-situ in an optical microscope. Our method eliminates interference from the electrolyte, allowing direct visualization of charging dynamics within the electrode. More broadly, we look employ strategies to correlate electrochemical charge/discharge experiments with other techniques, including diffraction and spectroscopy.

Many of our efforts on fluoride-ion batteries are on materials that have never been explored for intercalation. Therefore, to guide our interpretation of our electrochemical experiments, we also perform a variety of computational techniques. This helps us identify the phases that form and their electrochemical potential. This comparison of computation and experiment is a key strategy in our lab.

The progress made in computation within the last decade has been astounding. The combination of improved techniques for computation (evolutionary algorithms, machine learning, and high-throughput strategies) with massive online databases of material properties has made computation an indispensable tool for our laboratory. Our lab exploits many existing tools and develops our own in an effort to accelerate our experimental discovery of materials.

There are several ways that these computational advances have changed our lab, but the most basic way is that computation gives us insight about materials and their properties that cannot be obtained in any other way. For example, as experimentalists, we may have intuition that tells us that a certain combination of elements may yield a greatly improved electrode, but perhaps the phase diagram is completely unexplored. In such instances, we can use DFT and evolutionary algorithms to quickly calculate a phase diagram. This tells us whether there are new phases waiting to be experimentally discovered. Then, we can go to lab and synthesize these materials with increased confidence that our experimental efforts will yield a promising result.

In 2019, we built a Beowulf-style supercomputer using Intel CPUs and in 2020, we expanded it with AMD CPUs. Our cluster now has 30 nodes with nearly 1000 cores and is suitable for many different kinds of computational tasks that would be impractical or impossible on other supercomputers. This tool gives our lab an ability to perform high-quality density functional theory (DFT), molecular dynamics (MD), and evolutionary algorithm calculations but without the long queue times that are typical of shared supercomputers.